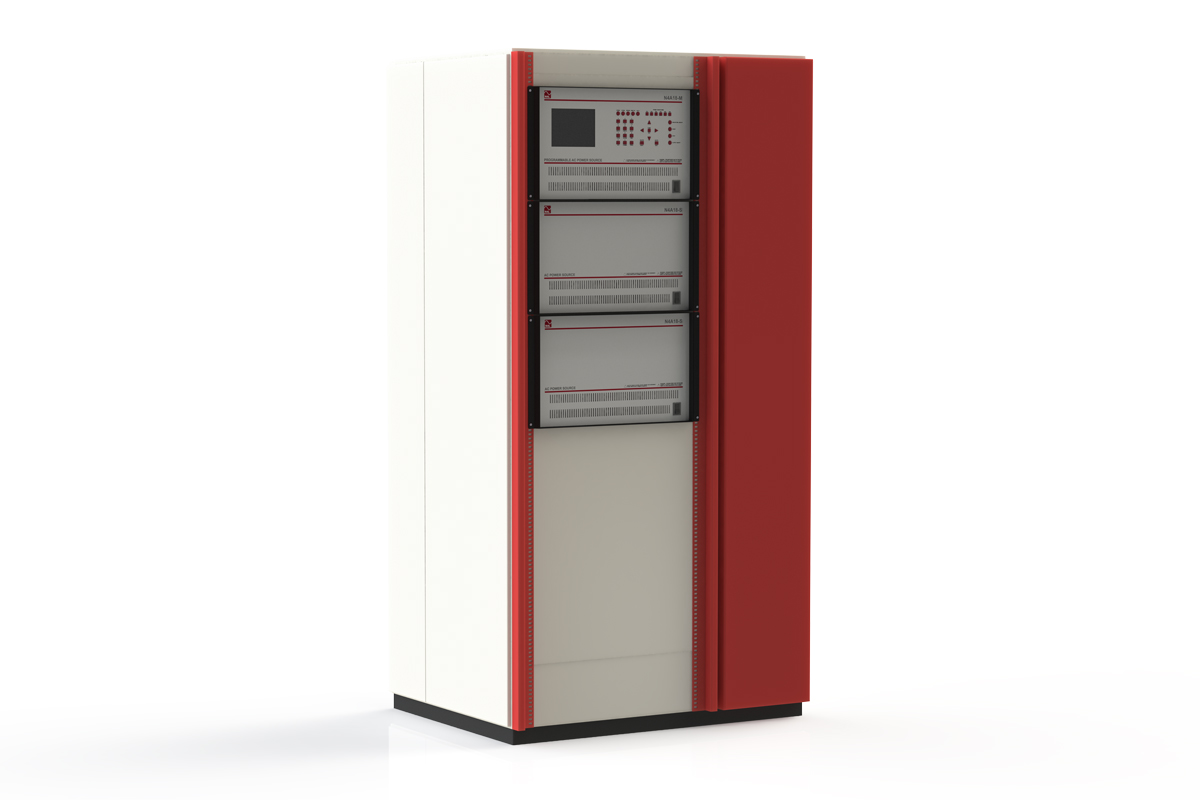 The N4A series of three-phase AC power supplies from Newtons4th consists of three programmable 3-phase AC power supplies with a capacity of 18 kVA, 30 kVA and 67 kVA. The N4A series has a so-called directly coupled output stage, which also makes it possible to generate DC or AC+DC output voltage. A striking feature is the fact that this series can deliver maximum power for 3 seconds to twice the maximum output.

This inrush current capacity makes it possible to still start up large motors, compressors or other equipment with a lower power AC supply, where the initial current is often significantly higher than the rated current.

Operation of the power supply can be controlled manually or remotely via the standard RS232, USB or LAN interface.

Harmonics and Flicker testing according to IEC standards?

With the combination with the free software you will then have a complete compliant test solution for these standards.

The N4A Series of Newtons4th consists of the following models:

Open the datasheet for detailed specifications of this product.

WHAT OUR CUSTOMERS SAY

"The ABB Power Grids Jumet organisation is an innovative development and production facility of ABB that manufactures active filters and battery energy storage systems to support a stable grid. To test these systems we have acquired two Cinergia GE/EL +120kVA eplus units capable of doing grid emulation (AC + DC), operating as an electronic load (AC +DC) and being a battery emulator. We have experienced very good support from TTMS in obtaining these two Cinergia units. This included organising an on-site demonstration and supplying loan systems prior to the delivery of our final systems. This way we could start testing as early as possible. TTMS also organised training for the operators from the original manufacturer. This support allowed us to introduce the first battery energy storage systems even prior to the full delivery of the Cinergia systems."

“At the Energy and Environment department of the Faculty of Science, Technology and Medicine (FSTM) of the University of Luxembourg we do have different research projects related to green energy contributing to the development of eco-cities. As a long-standing partner of our research unit, TT&MS has proven that they are able to answer even the most complex questions in a professional manner. They have shown that they are always up to date with the latest technology and do not spare any effort to look at the application and even the situation on site. The exchange of ideas was always very pleasant and took place quickly. We look forward to further years of fruitful cooperation.”